An Architectural Heritage of Luxury and Tradition 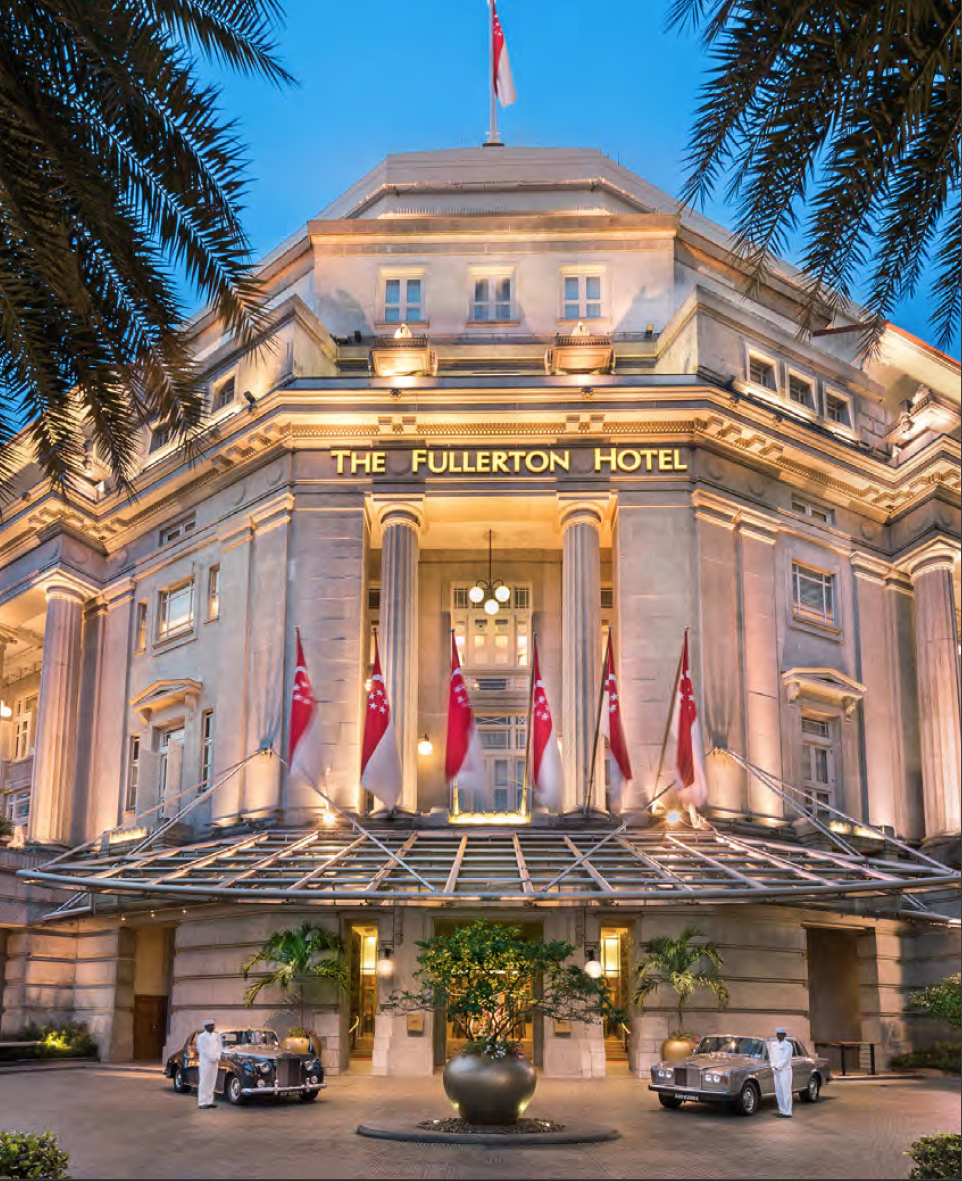 Against the backdrop of Singapore’s post-modern and contemporary skyline is a majestic landmark: The Fullerton Hotel. However, the hotel was not always a hotel.

The site began as a fort in 1825 colonial Singapore. Named after Robert Fullerton, the first Governor of the United Settlements, Fort Fullerton was built to defend the British crown colony of Singapore. As the nation grew, so did the infrastructural needs. The construction of a sea wall – known today as Collyer Quay – enveloped the fort within the city. Along with its adjacent Fullerton Square, the fort was repurposed into a splendid neo-classical masterpiece created by Shanghai-based architect firm Keys and Dowdeswell.

The design incorporated the Beaux-Arts traditions of the Baroque and Renaissance periods, as well as ancient Greek and Roman architecture. Inside, the functional building was designed with internal air-wells for natural ventilation and cooling – a revolutionary idea before the advent of air-conditioning. It included two basements and a subway to Clifford Pier for easy access to the harbour.

The Fullerton Building immediately became the natural heart of Singapore. While the building’s anchor tenant was the General Post Office (GPO), it also housed various government offices and organisations, including the Singapore Chamber of Commerce and the Singapore Club. The structure’s strategic position was not lost on the Japanese who used the building as their headquarters and hospital during the war. Its institutional use remained even after Singapore’s independence up till the mid-1990s.

As a tribute to the building’s pivotal role in the nation’s history, Fullerton Building was gazetted for conservation by the Urban Redevelopment Authority (URA) in 1997. That same year, the site was acquired by Sino Land for restoration and conversion into a luxury hotel. After a S$400 million restoration, Fullerton Hotel was born.

The building’s Palladian architecture, a rarity in a fairly young city such as Singapore, made it eminently suitable for a grand hotel.

As a historic site governed by strict conservation guidelines, and the fact that The Fullerton Building was never designed to be a hotel in the first place only intensified the challenges faced during the restoration project. Tay Lee Soon, principal designer of the project recounted, “The historical building was designed from the outside, hence the internal floor levels bear no relationship to the window heights.”

Sino Land undertook the decision to transform Fullerton Building into The Fullerton Hotel. While the Public Works Department had performed some additions and alterations in 1985, it did not do the site justice. To ensure proper and accurate conservation, historians and expert architects were roped into the conservation project.

The guidelines, stipulated by URA, called for minimal alterations to the exterior, restoration of the building’s neo-classical architectural Doric colonnade columns in Aberdeen granite and high-ceiling verandas with original 1928-specified Shanghai plaster panels. Window frames from the 1985 works were rehoused back to timber. The structure’s beams and columns were reinforced. Inside, the General Post Office gallery area and Straits Club Billiard Room were ordered to be faithfully restored.

Sino Land tasked Hirsch Bedner Associates to transform the restored Fullerton Building into a five-star hotel. The result of the restoration is a masterpiece that harks back to its yesteryears– resplendent in natural light streaming across the hotel’s central triangular skylit atrium. It’s a neoclassical revival with fluted Doric colonnades at the base, and a lofty portico that brilliantly evokes a sense of awe and grandeur.

The 400 rooms and suites, classically furnished, but fitted with business connectivity are lined in a parallel fashion, facing either the hotel’s atrium or downtown Singapore skyline and bay area. The luxury hotel is complete with a 25-metre outdoor infinity pool, fitness centre, luxury spa and restaurants. Even the building’s historical lighthouse, which served as a guiding light for ships in the 1950s, was transformed into a restaurant.

In a span of just over a decade, The Fullerton Hotel has catapulted to become one of Singapore’s most sought-after destination for visitors and locals alike. Its illustrious heritage, together with its prime location that is situated at the crossroads between stately colonial buildings and the futuristic skyscraper city, makes the hotel inherently unique. The brand is intertwined with The Fullerton Building’s history, and most importantly, that of Singapore itself, immersion in the best of Singapore’s past and present. Combined with the expertise of Sino Group of Hotels and sister company Far East Hospitality, The Fullerton Hotel is recognised as one of the best establishments in the world, renowned for its successful blend of heritage with contemporary style, personalised service and excellent dining experiences.

The Fullerton Hotel’s experience is really about opening bridges and offering a seamless connection between Singapore’s heritage and modernity.

For over 80 years, The Fullerton Building has remained a prominent fixture on Singapore’s skyline, witnessing Singapore’s history unfold around it from its strategic location at the mouth of the Singapore River. Its unique position in Singapore has also allowed the replication of its success with the restoration and conservation of Clifford Pier and Customs House. From The Fullerton Hotel to One Fullerton, “The Fullerton Heritage” combines both historical and contemporary, propelling Singapore’s past and future ahead.

Heritage hotels are not like commercial hotels. With strict conservation codes to adhere to, they cannot necessarily expand as they please. And perhaps that is why and how The Fullerton Hotel continues to retain its old world charms while continuously maintaining a sense of modernity, luxury and exclusivity.